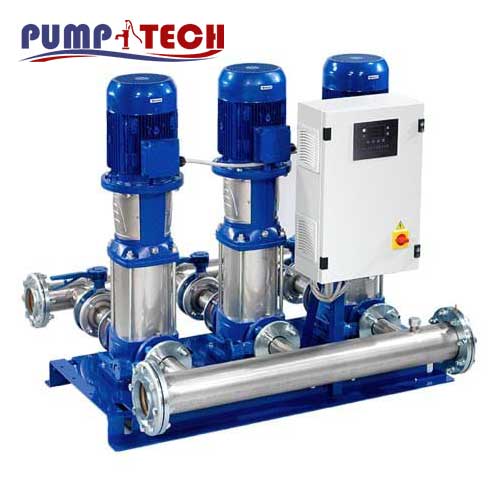 The Lowara GV series booster sets are fully automatic booster sets for water supply. They are equipped with 2-6 pumps (where one can be a jockey pump), pressure transmitters and control panel including a SD60 controller and a variable frequency drive, all mounted on a frame for easy installation. One pump is speed controlled and the rest operates at full speed. With the SD 60 controller it’s easy to set and check the performance either on site or remote via Modbus or internet.

The GV series can be fitted the following pumps:

In GVF series booster sets only one electric pump operates at variable speed, while the others operate at fixed
speed.
The pump is driven by a frequency converter directly inside the electric panel; the other pumps, up to a maximum
of five, are started by contactors.
All the pumps are controlled by the SD60 control unit which is on the front of the electric panel door.
The pump driven by the inverter modulates its speed according to the system demand, while the other pumps
run at maximum speed.
The first pump to start will always be the one connected to the frequency converter, the other pumps will start
in sequence after the first. It is possible to have automatic alternation of the fixed-speed pumps to distribute
wear and allow the pumps to operate for a uniform number of hours.
Starting and stopping of the pumps is determined according to the set value of pressure in the control board
menu. The pressure value is read by a pressure transducer connected to the SD60 control unit.

GVF series booster sets guarantee constant pressure of the system even during frequent variations in water consumption.
When the booster set is connected to the system, the pressure value is read through the transducer fitted on the delivery of the system. The value found is compared with the set value. The check between the pressure value found and the set value is made by means of the PID regulator, which corrects the difference between the two values, acting on the frequency variation/number of motor revs, modifying the pump performance over time.
The PID regulator is in the SD60 control board.
In the event of breakdown of the frequency converter, the SD60 board automatically takes control of the booster  set functions.

GVF series booster sets use a sensor as a standard device to control pressure. For each booster set there are two transducers (one standby) where, in the event of breakdown of the first, control automatically passes to the second.
The SD60 control board allows the use of other control devices such as flow, temperature or level transducers, according to the needs of the system. It is possible to set the measuring unit directly from the control board menu.
These control devices must be specifically requested, as they are not used as standard features on GVF series pressure booster sets